Hi my furry friends. I was tagged by Guinness & Shiloh in this new fun vehicle game. You are supposed to pick a vehicle that best resembles your personality. Well, since mom does not know that much about vehciles (just how to drive it, put gas in it and tell dad the check engine light is on), I got dad to play. (mom had to find the pictures and post)

I would be an Acura RDX with the turbo charged engine because I have great maneuverability and can stop on a dime. And I do have that turbo ability. I would be this silver and gray one, Very sleek and fast. Awooooooo.

I wanted Missy to play too! Dad said she would be a 1972 Oldsmobile Cutlass station wagon with a rocket 350 engine with the four barrell carbureator (it's a classic, like Missy), because when she wants to go, she has that extra burst of speed. I say it's because they are both "big girls." Ha roo roo rooo. Of course mom had to include her Cubby (he's still with her in spirit). Dad said Cubby would be a GMC Yukon Denali, the XL white one, with the big 44 mud/snow tires. He was a big white dog with really big paws.
Well, this was fun! And it got dad to participate too! Thanks for tagging us. I'm gonna tag
Lorenza, Star and Jack, Indy, and Steve, Kat and Wilbur. I didn't go out much today. It was too hot again. So I looked out the window. Some one needs to clean it, it's getting smuges on it. Have a good night my furry friends.
Husky Hugs, MayaMarie
As told by The Husky in the Window at 7:41 PM

The Army of Four said...

Great choices! Isn't this a fun game!?!?
Play bows,
Zim
PS: I LOVED that lizard in your last post! Did he ever try to get into the house?

Zoom zoom zoom!
Great vehicles, my humom really liked the 1972 classic wagon - she remembers those! Now that you tagged us, we'll have to put the pedal to the metal & think "cars!"

Wow, your dad sure knows his cars! Our windows get smudgie too. Mom grumbles if she doesn't get to them right away and she needs to scrub nose prints off of them.

Hi, MayaMarie
Thanks for the tag. This time we have to think a lot because me mom knows zero about cars (among many other things of course)!
Besos
Lorenza

Those are grrrreat car choices, glad your dad helped out, our dad had to help us too, on Mikki's car.
Mom says we keep nose prints on all the windows, house & car both. We can put 'em on faster than she can wipe 'em off. Hahawoowoo
Manykisses,
Bama & the RHP

Oh they were great answers! Mom is grumbling right now because she added you to our favorite blog list weeks ago and now you're gone! We're putting you back on. Geesh!
ECHO

Mistress used to play car quizes on one of her forums so she knows slightly more about them these days. That's not saying much though.

And speaking of cars, my Landy has dirty smudgy windows too and I noticed last time that it hadn't been cleaned so I cleared off to a different spot so I could dirty another one, I mean look out of a clean one.

Wow, we will have to really put our thinking caps on to come up with our answers!!

Ooohhh, those are good choices! I like that you included Cubby! He sounds a lot like me. Size wise anyway!

The last pic of you standing by the window is so so cool!!
Oh and those are paw-fect car choices!

We've tagged you girls for a new game, The Nickname Game (we hope it's new, anywhoo). Check out our last post for details. We're losing our human typist for about a week, so we've been trying to wear her fingers out before she goes, it's gonna be SO lonely without our blogger friends for a whole week!
Manykisses,
Bama & the RHP

Oh, all of these are awesome choices for a vehicle!! Good Job. Hey, that is a great photo of you looking out the window!
Hugs,
Sitka

AEWsome choices, MayaMarie!! I love it!

Bark!
Heylo MayaMarie.
My mum adores huskys.
just showing some love.
i'll be back on you're blogger later, or soon.
-Peaches.

Fuel is the adrenaline of any car, truck or engine. Thus, it is every vehicle owner's wish to enhance the fuel of their car and save more of it as well. With this in mind, the most innovative fuel-saving tool in the automotive industry was conceptualized and created: the Tornado Fuel saver. An automotive air channeling tool that creates a swirling air motion, the Tornado Fuel Saver allows the air to move in a faster and more efficient way by whirling air around corners and bends. Hence, more fuel is saved. 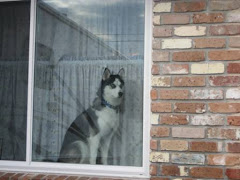 Home Made Dog Cookies From Our Kitchen To Your House

About Me and my Sisters

The Husky in the Window
A Very Spoiled Husky that lives in the South where it is way too hot. I have an older sister, Missy a Shepherd Husky. Before both us was the big guy, an Alaskan Malamaute "Cubby". And now we have a new sister husky, Bella